A Helicopter sound can be created by using noise patched through a filter. The RECIPROCATING sound of the helicopter blades can be simulated by one of two methods:

1. Use an LFO to open and close the bandwidth of the filter at a constant rate, OR

2. Patch the output of the filter to an amplifier and then use an LFO to turn the amplifier on and off at a constant rate.

The method presented here will be #1 (use an LFO to open and close the bandwidth of the filter at a constant rate).

Choose NEW under the FILE menu to open an empty Syd document.

Click and drag a RANDOM NOISE OPERATOR from the operator palate (that’s the one with the question mark on it — ?) down to the main part of the window.

Next, click and drag a BUTTERWORTH FILTER OPERATOR from the operator palate.

Connect the output of the RANDOM NOISE OPERATOR to the input of the BUTTERWORTH FILTER OPERATOR.

Connect the output of the BUTTERWORTH FILTER OPERATOR to the MAIN OUTPUT. 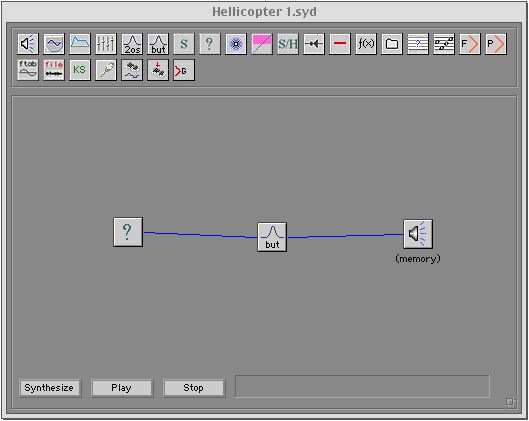 The RANDOM NOISE GENERATOR creates NOISE such that all frequencies and all amplitudes are randomly giving a steady output of what would sound like ‘radio static.’

The BUTTERWORTH FILTER is a variable band filter which allows four types of filtering:

Double-click on the BUTTERWORTH FILTER to open its edit window.  It should look like this: 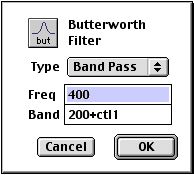 Set the values in the various fields so they show these values.  Specifically, random noise will be passed to the filter.  However, only a specific frequency of noise will be allowed to pass through (400 Hz).  The BAND ‘width’ will be controlled by the variable, Ctl1.  Think of the  BAND WIDTH as the filter’s amplitude — the wider the band, the more noise passes through centered around the specific frequency contained in the FREQ field.  In other words, the wider the band, the louder the noise.  The value in the FREQ field controls the apparent pitch of the noise.  A high value would allow ‘high-pitched’ noise to pass through.  A low value would allow ‘low pitched’ noise to pass through.

Set the values in the BUTTERWORTH FILTER as pictured above and then click OK.

Specifically, you are setting the:

Click and hold on the above connection and then select the connection type as: ALT CONTROL SIG#1 [Ctl1].  See below for detail: 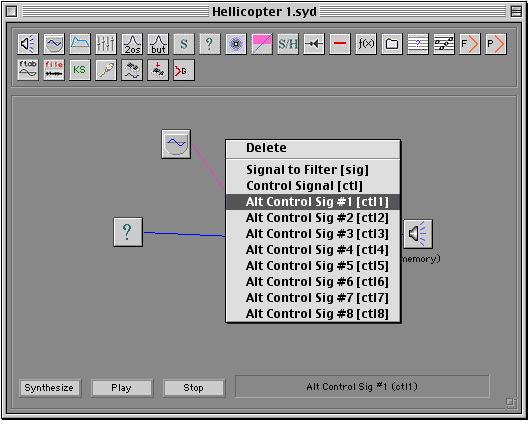 Set the parameters of the OSCILLATOR OPERATOR to these values:  Freq: 10; Amplitude: 200 (this oscillator will control the bandwidth of the filter by adding and subtracting 200 to the band width, thereby opening and closing the bandwidth).

Make sure the MAIN OUTPUT OPERATOR is set to MEMORY and not to FILE.

Explanation for including an offset in the Butterworth Filter Band field:

In the above patch, you are using a sine wave Oscillator to control the opening and closing of the bandwidth of the Butterworth Filter. This is what creates the characteristic oscillation of the ‘Helicopter’ sound. If you send just the control signal (ctl1) to the Band parameter field, then the Oscillator would send all values of the Sine Wave (positive and negative) to the Bandwidth parameter field. 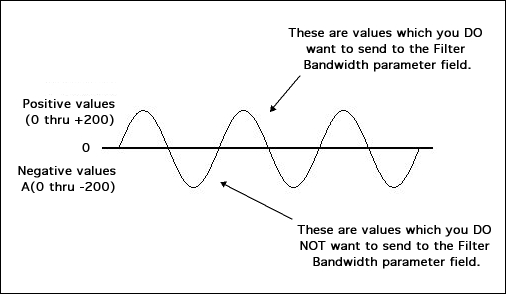 To cancel out the negative values of the Sine Wave (0 thru -200), use an ‘offset’ in the Filter Bandwidth parameter field which is equivalent to the AMPLITUDE of the modulating Sine Wave:

If the overall output (volume) of the patch is not loud enough for you, then add an AMPLIFIER operator by patching the output of the filter through the amplifier. The finished patch might look like this: 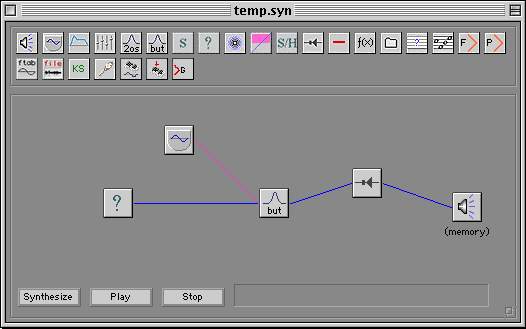 Variations on the Basic Helicopter Patch:

Variation 1: Change the waveform of the LFO to a square wave (instead of a sine wave).

Variation 2: Change the frequency of the LFO to higher or lower values. A high value (60) might suggest some kind of buzzing machine such as a small airplane propeller or a motor boat.

[If you are having trouble understanding any part of the Helicopter Patch tutorial above, you may want to repeat earlier sections of the SYD TUTORIALS.]

Instead of controlling the BANDWIDTH of the filter with an LFO, connect the output of the filter to an amplifier and then use an LFO to control the amount of amplification. Remove the LFO oscillator operator from the filter and set the filter values to (frequency = 400), (bandwidth= 200).

IMPORTANT: be sure to:

– use a SINE WAVE and not a SQUARE WAVE when controlling the amplifier. 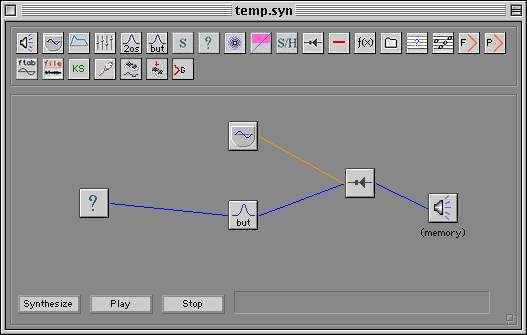 Setting the frequency of the LFO on the above patch to values less than 8 will suggest sounds like: